The three heritage listed buildings in Collins Street collectively known as the Olderfleet Buildings are part of a larger development project planned by Mirvac. Lovell Chen is providing heritage advice, and has completed a condition report in advance of conservation works. All three buildings, though facing different issues, demonstrate the dilemmas of conservation, as earlier repair works now appear to have been less successful than undoubtedly intended. 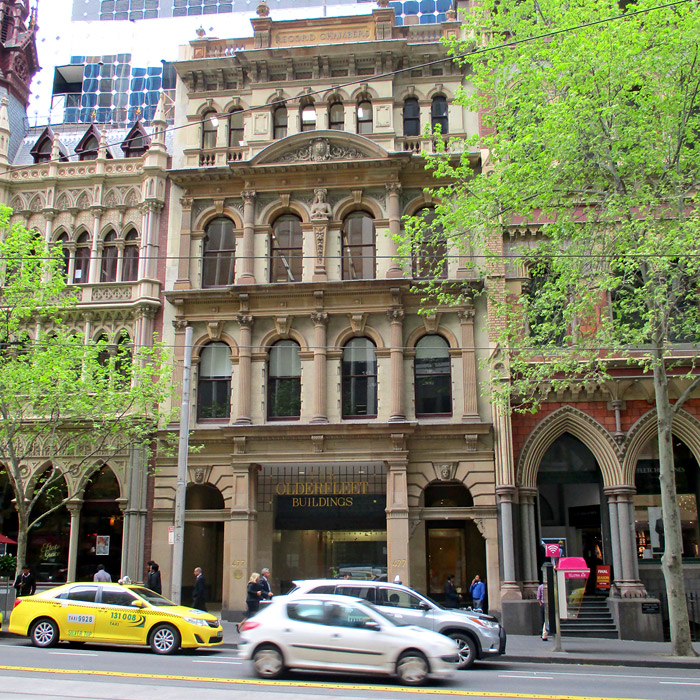 The Olderfleet Buildings were the subject of extensive external conservation works in the 1980s. As much of the orginal fabric was retained as possible. However, the various products applied over the original degraded surfaces have not had the desired effect of protecting them, and will be difficult to remove without damaging the fabric further.

At 471-477 Collins Street, the Olderfleet Building (completed 1890), by William Pitt, was constructed in the Venetian Gothic style, in red brick with cement dressings, and features a clocktower. Next door is Record Chambers (completed 1887), designed by J.A.B. Koch in sandstone and limestone, and an example of free Classicism. The third building is the former South Australian Insurance Building (1888), designed by Oakden, Addison and Kemp. It too is Venetian Gothic, with a glazed terracotta facade in red and buff. All three are four-storey and have been retained by earlier development to depths of between 11 and 13 metres. 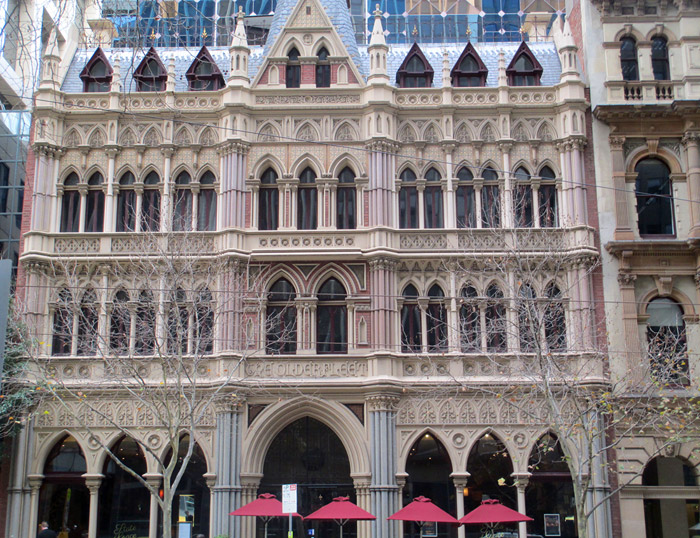 The challenges include: the removal of hard mortar used to re-render cornices, sills and copings; the rectification of changed sill profiles; the removal of paint used to conceal earlier unsympathetic repairs to tile work; the removal of paint applied to limestone; and the possibility of further issues arising after unsuitable layers are removed. Research on ways forward is continuing.

Lovell Chen’s heritage and conservation teams are working together on this project, providing design advice for the first phase permit application, a conservation works schedule, and ongoing heritage and scheduling advice. Mirvac is planning a 40-storey tower designed by architect Grimshaw for the site behind the Olderfleet Buildings, which is outside the heritage listed area.