The majestic Flinders Street Station clock tower is once again visible at the end of Elizabeth Street, a tantalising foretaste of the refurbishment project to the exterior of whole building, which is nearing completion. The historic clock — once the master clock for Victoria’s railway network — was restarted at the end of January following a year of conservation works and seismic strengthening to its ten-level tower. 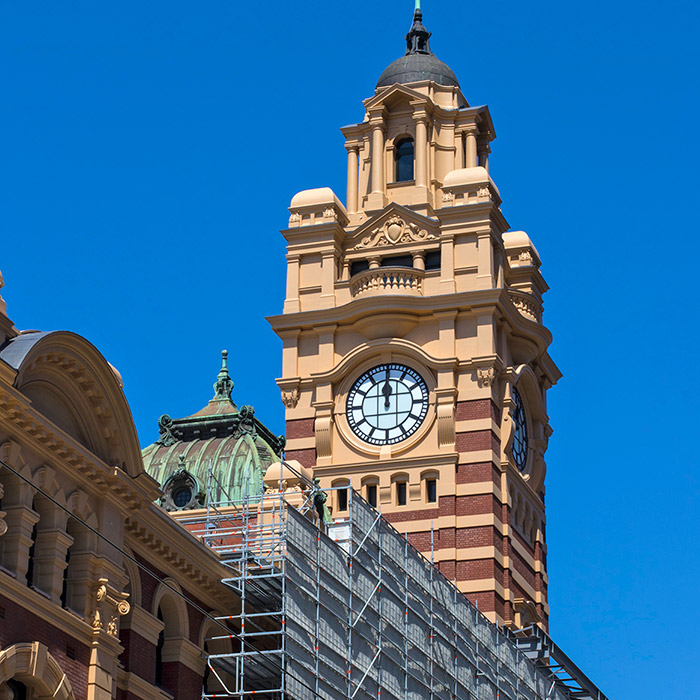 Lovell Chen has a long association with Flinders Street Station, undertaking heritage report work, finishes investigations, archival recording, condition reports and documentation for conservation works. For the current project, we are working closely with Built, main contractor for the delivery of the station exterior, seismic and tower works, and with project manager Development Victoria and structural engineer Bonacci Group. 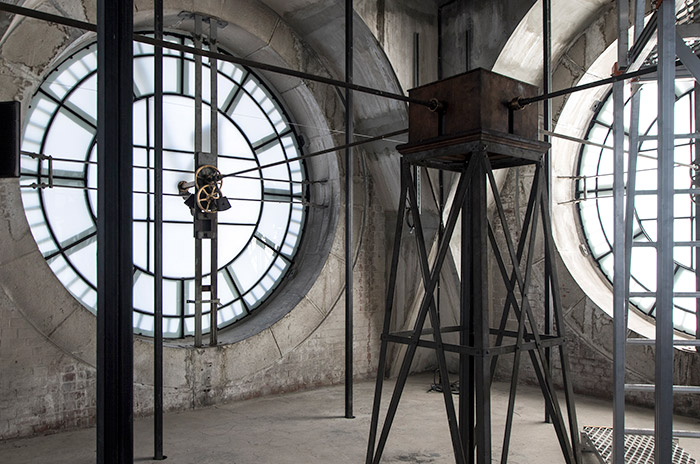 The western dial of the clock was damaged by hail in 2010/11, and the other three faces were cracked. Parts of the clock mechanism were dismantled to allow access to the dials, which consisted of outer rings of imported opal glass and central panels of plain glass painted white on the reverse. These have been replaced with laminated toughened glass, again opal for the outer rings, and seraphic glass, which has a ceramic glaze on one side, for the inner panes.

The main clock mechanism remained in place throughout the works. Its original hydraulic drive shaft system spread over four levels of the tower but has now been dismantled and stored in favour of a new planetary geared electric winder.

Works to the tower also included refurbishment of the flagpole mechanism, repairs to the copper dome, glazing for the tower lantern, drainage system replacement, roof and joinery repairs, and repairs and painting of the fabric. For seismic strengthening, an internal system of post-tensioned steel cabling has been installed, anchored to steel ring and tie beams.