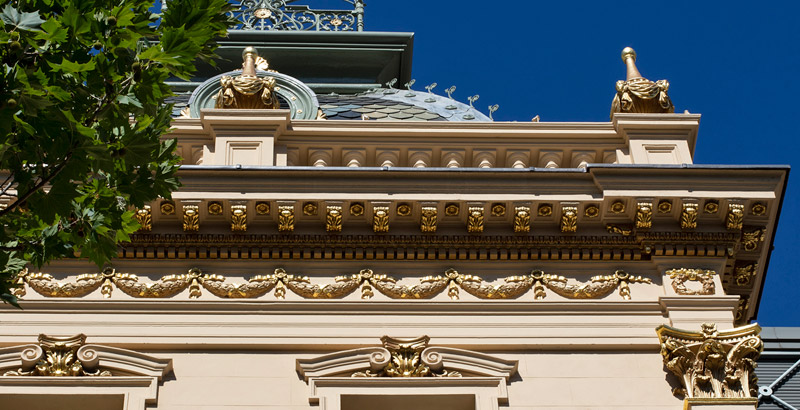 Melbourne has an extraordinary number of extravagant theatres, and none is closer to the hearts of its theatre-goers than the Princess Theatre — the oldest in the city. It was completed in 1886 by architect William Pitt, with extensive external works in the early 1900s and interior remodelling by Henry E. White in 1922. We have been investigating, documenting and guiding internal and external conservation works at the theatre since the late 1980s. In 2018 we completed the conservation and restoration of its glorious Second Empire facade and decorative scheme, largely untouched since 1989.

Working to the principles set out in the Australia ICOMOS Burra Charter (2013), traditional methods and materials have been used in a precise restoration/reconstruction of the elaborate exterior elements and ornamentation, which include three slate-roofed pavilions with decorative ironwork, balustrades and urns, giant Corinthian pilasters, classical ornaments, stained glass from 1901, a central pediment with the British coat of arms, couchant lions and a representation of Fame. The fabric of the building has been preserved wherever possible, and where repairs have been necessary, replacements have been made like-for-like.

The project enabled Lovell Chen to undertake a more-rigorous investigation and response to presenting the 1922 exterior colour scheme. Our finishes report of 1989 has been used extensively, and new investigations confirmed exact locations and specifications for the various treatments. In stripping back the facade to its render substrate, numerous different coating systems used to cover historical repairs were identified and carefully removed using a poultice system. This revealed a pattern of false joints, part of the original scheme but no longer discernible. The sympathetic paint treatment now applied reveals them once again. Gold/silver paint with gold/silver leaf highlights, or in some cases a full gold/silver leaf finish, has been reinstated to the ornamentation and decorative elements.

Other aspects of the conservation works include: render repairs to the Spring Street facade and eastern and western returns; brickwork repairs and repointing to the rear wall of the auditorium on Little Bourke Street; slate and leadwork cleaning and repairs to the roofs; and timber joinery repairs. The rendered brick and pressed cement balustrading has had previous fibrocement repairs removed and new ones done in the traditional way. Weatherproofing works include internal gutter works and new lead cornice cappings. The stained glass enclosing the Wintergarden has been cleaned, repaired and re-puttied.

The best-practice conservation of the exterior of Princess Theatre is an important outcome for Melbourne and its theatre practitioners, and skilled conservation technicians and tradespeople. It’s a unique building that stands comparison with its London counterparts, and is a prominent example of elaborate 19th century theatre building. And it looks beautiful, twinkling once more as the lights come on for evening performances.

Princess Theatre is owned and operated by the Marriner Group. In 2016, we completed conservation and restoration work to the stalls foyer.