Many organisations are re-thinking their work practices and looking closely at the working environments they offer their staff. The Royal Australasian College of Surgeons (RACS), which occupies a landmark building in Spring Street, is a great example. Based on employee feedback, they are investing in making their building more suitable for collaborative work, better for home/office hybrid working, and more comfortable.

In a light-touch project led by Lovell Chen, Levels 2 and 3 of the West Wing and 3 and 4 of the East Wing are the focus of the works, which make the most of the building’s existing advantages by improving the visual and physical connections to the courtyard for example. 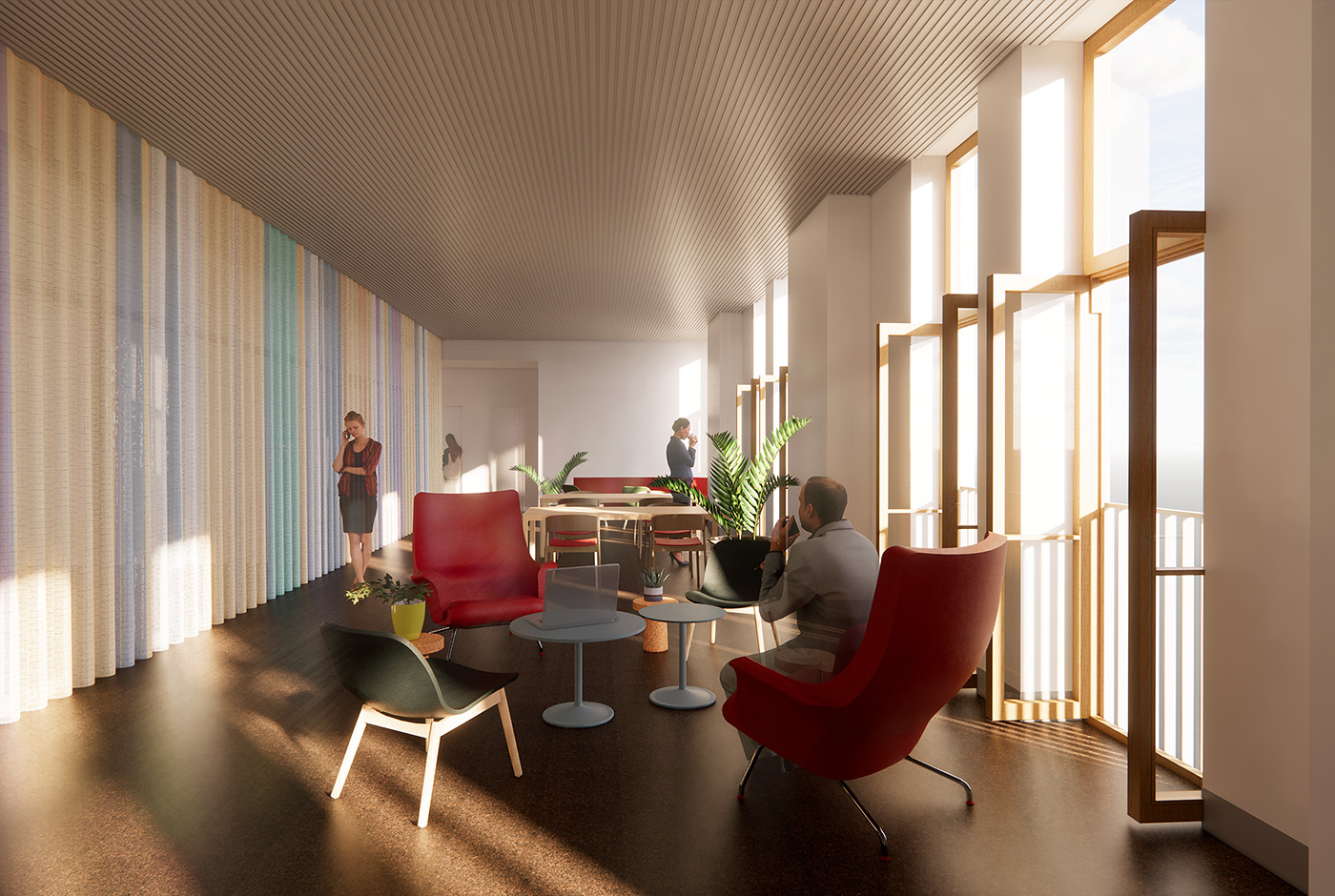 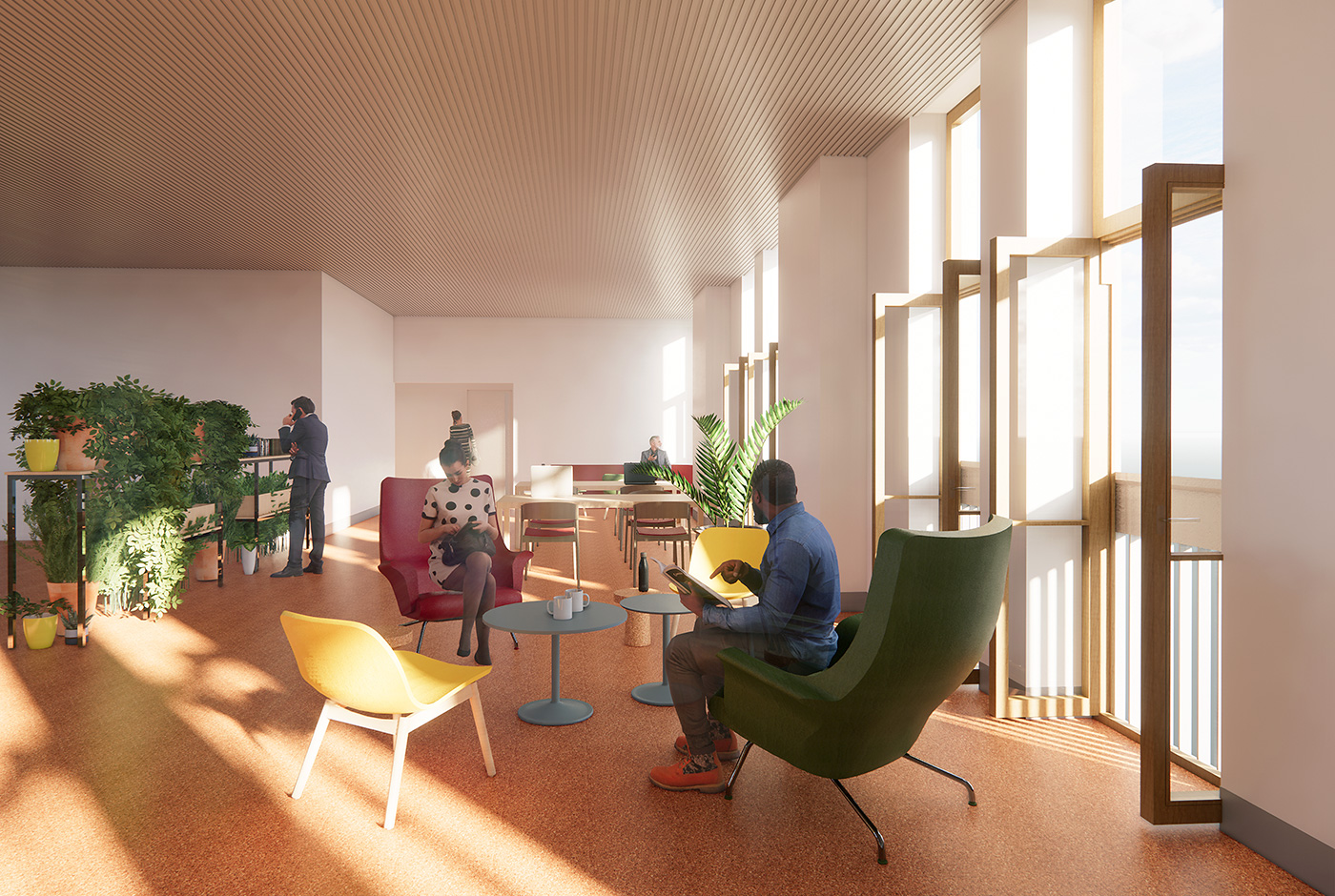 The functional changes introduced by RACS include a changeover to mostly hot-desk working, and the introduction of a new hub space in the West Wing — a touchdown point for the start of the day and a flexible space for social uses. 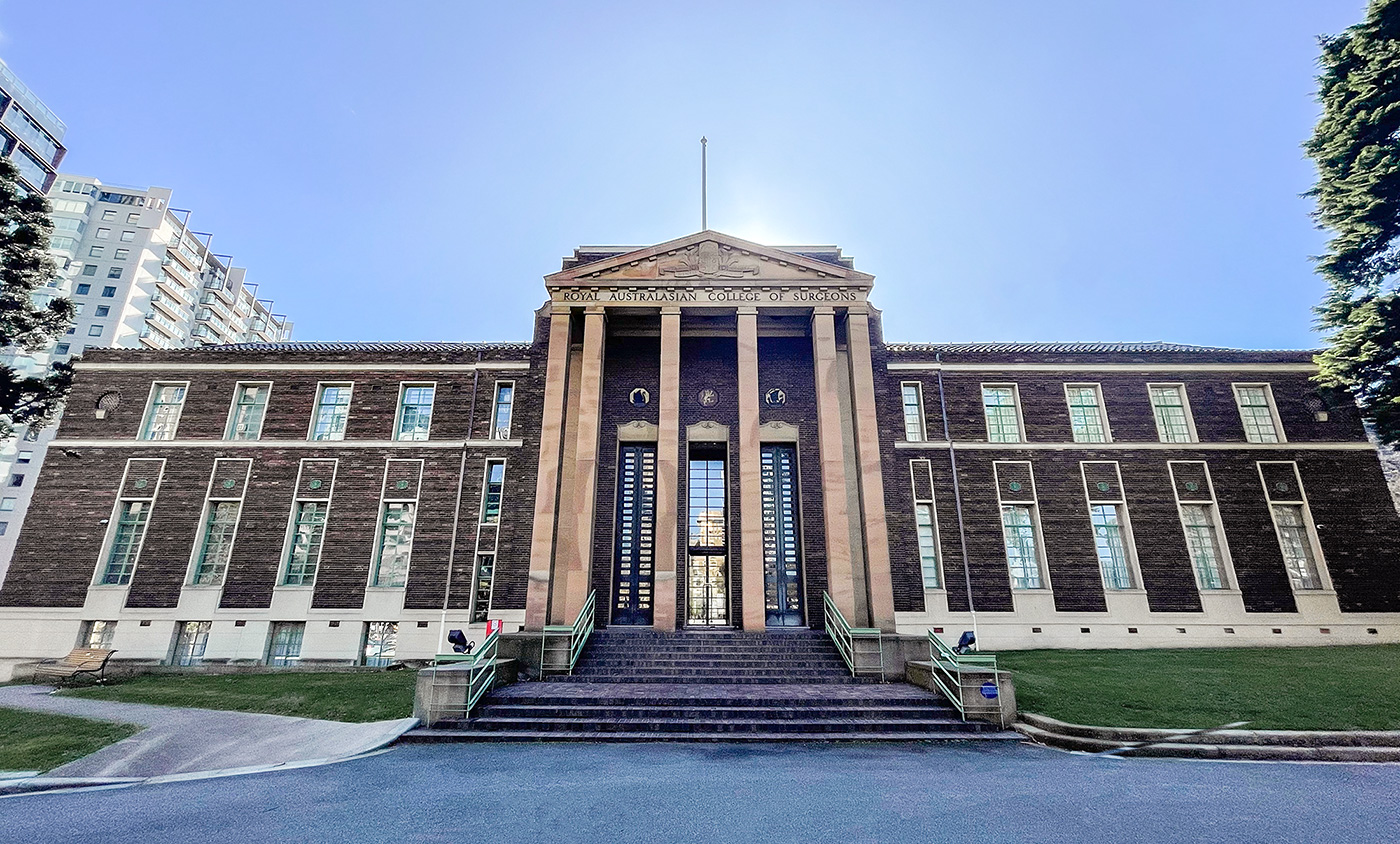 The original (south) wing of the RACS building dates from 1934-35 and was designed by Irwin & Stevenson. This wing is heritage listed. We have been helping RACS with various studies, reports and conservation works since 2002 when we completed a conservation management plan. 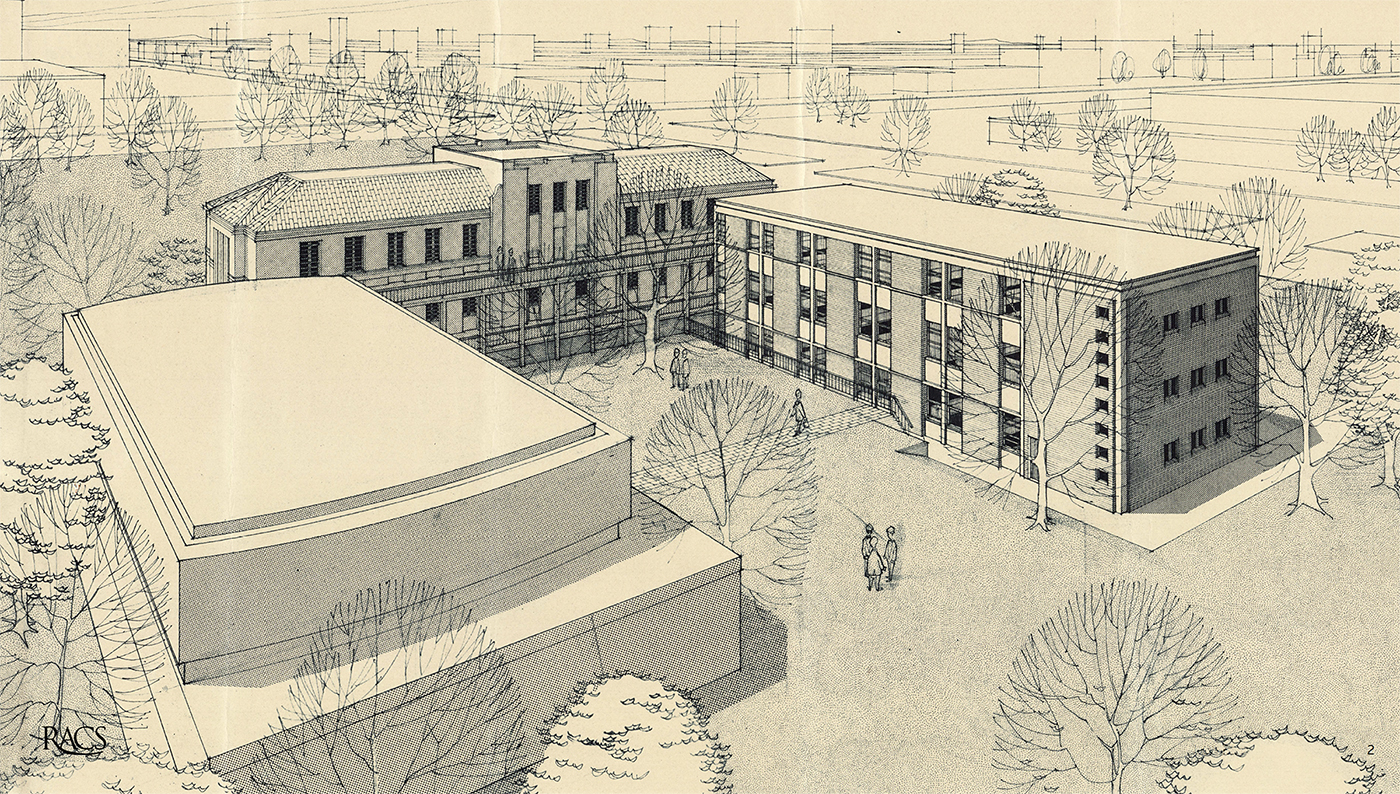 [ The northern side of the complex, with the 1963 West Wing on the right and an (unbuilt) proposal for the East Wing on the left, perspective : Leighton Irwin & Co Pty Ltd ]

In upgrading the shell of the 1960s West Wing, we are taking our usual Passive House approach to building reuse. This includes insulation of the building from the inside, and adding roof insulation and high performance glazing. The embodied carbon figures for this wing have been calculated.

There’s no doubt that adapting and reusing the city’s existing building structures will play a major role in helping society tackle the challenges of climate change. In this project with RACS, we get to combine that approach with an exploration of new office working models, making the fabric work harder to achieve sustainability targets and improved conditions. 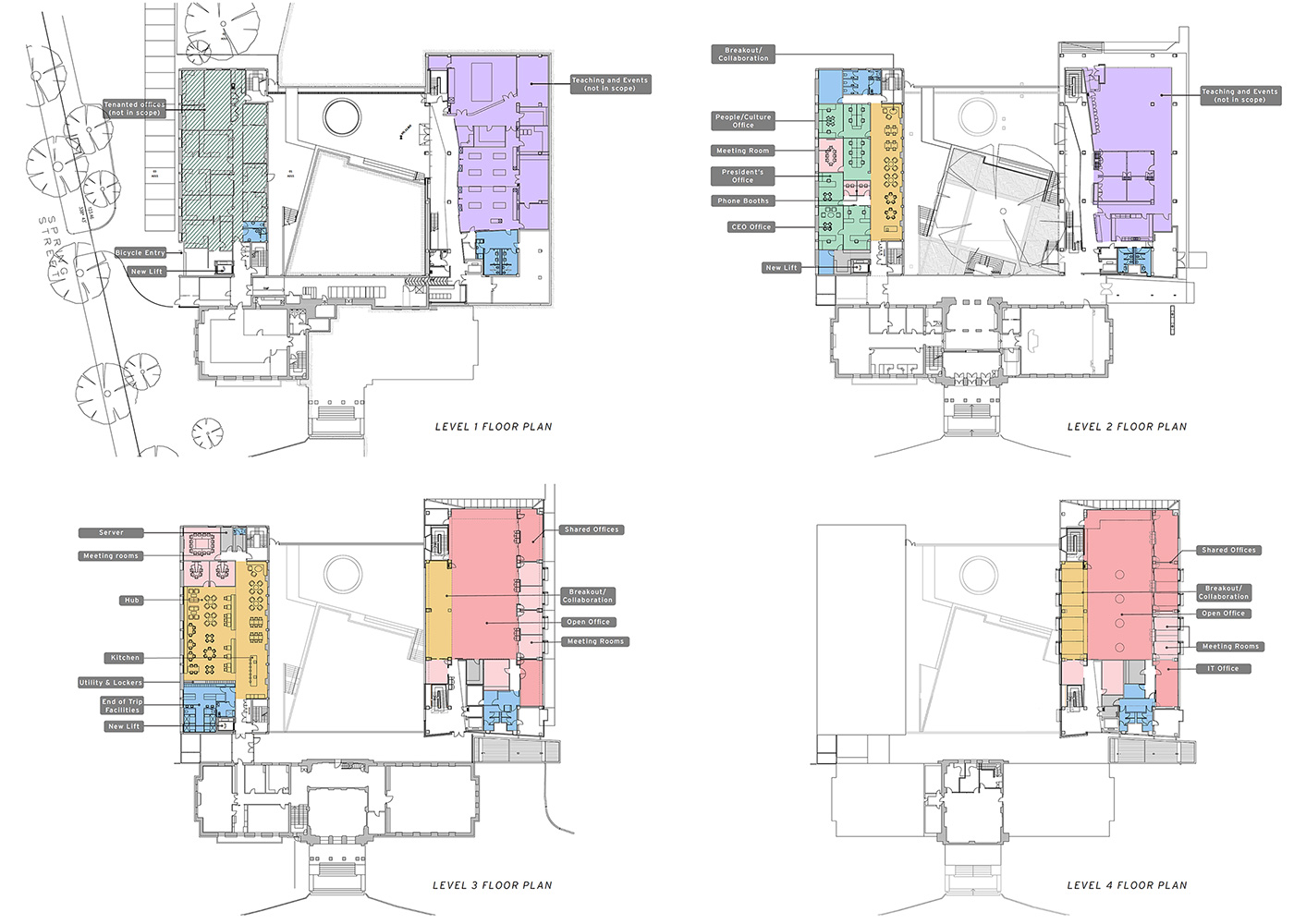 The Royal Australasian College of Surgeons is a non-profit organisation that trains surgeons and maintains surgical standards in Australia and New Zealand. It was formed in 1927 to advocate for standards, professionalism and education. The Spring Street building is its headquarters.