Sharp-eyed St Kilda residents will have noticed that the scaffolding that has long covered the Palais Theatre is coming down, revealing its refurbished exterior — and new paint colour. Or rather, old paint colour, as the building is now back to its original sandy tone, which had been painted over in the mid 20th century. Reinstatement of the original colour scheme is a condition of the Heritage Victoria permit issued for the $20m refurbishment works to the listed building. 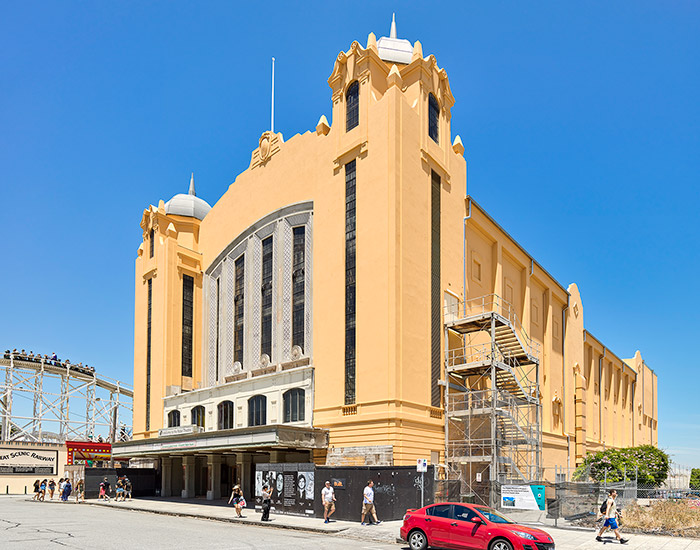 The aim of the refurbishment project is to ensure the future of the Palais as a viable live music venue. It opened in 1927 as ‘Palais Pictures’, joining the adjacent Luna Park (1912) and Palais de Danse (1913) on the St Kilda foreshore. The Palais’ architect, Henry E. White, a prominent Sydney-based theatre interiors specialist, achieved the original exterior finish using ‘copperas’ — an iron sulphate wash over render, resulting in a sandy orange colour.

The Palais is one of several major Melbourne buildings that we are working on that had the copperas treatment. It relies on the interaction of the iron sulphate solution with the fresh lime in a rendered coating. So far, it has not been found possible to recreate the process on old rendered surfaces. The current options available for reproduction of a similar colour affect include the application of a skim coat, and this the solution we used recently for the exterior of the dome drum at the State Library of Victoria.

Alternatively, a coating system such as a mineral silicate paint could be used. For the Palais, this was the approach chosen, as we were able to remove the more-recent build-up of paint film to reveal the natural rendered surface. The ability to apply mineral silicate paint to a natural rendered surface is important in ensuring that the paint delivers its long life characteristics.