We are working on an oral history project as part of our wider heritage and architectural adaptation project at the former Kinnears Rope Works in Ballarat Road, Footscray. Five people representing a broad range of experiences and roles at Kinnears are contributing their stories and memories of the manufacturing processes, the multicultural nature of the workforce, the physical development of the site and the social aspects of their time there. The recordings and transcripts will make their way into the Kinnears archive at the State Library, and will feed into the development of the site interpretation that is also part of our commission. 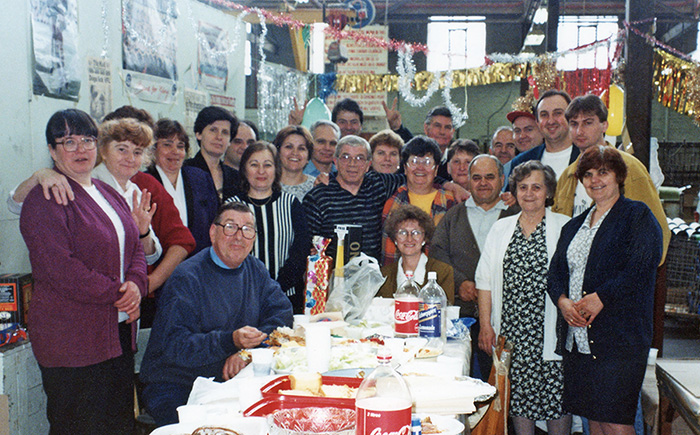 The huge Kinnears Factory, which closed in 2002, was 24-hour operation — with around 400 day workers and another 400 working in two night shifts. It manufactured rope, string and twine, plus many associated products. Oral histories are an ideal way to capture a detailed and nuanced understanding of such operations, the use of spaces and machinery, and the contributions of individuals.

The five contributors to the project were located through contacts and research. Two are women who started work at Kinnears in the 1970s and stayed more or less until the factory closed: Karyn Pacholli and Julianne Nichols. The other three are men who worked for varying lengths of time: Don Barger (45 years’ service), Lindsay Hargreaves (34 years’ service) and newly-arrived immigrant Tony Blansjaar, who worked at Kinnears for two months in the 1950s. Two of the five were manual labourers, one an engineer/maintenance person, one in administration and one a forklift driver who moved to management.

The oral history project was set up with the assistance of consulting historian Sarah Rood of Way Back When, and is being conducted by Lovell Chen historian Libby Blamey.

“They used to make all the fibre, put it together, put it in a big bank — wooden strips with big pegs there — and that used to feed the rope walk. They’d pull the strands out with a traveller and they were twisting it at the same time. A quarter of a mile long. They’d go out and make three strands — it all depends on the size of the rope — then they’d put those three together up the top here and bring the top — the traveller used to pull it out. They had a little top-car, they use to call it … they’d be driven down here and that’d put the three strands together and make a rope that big, that big. Rope was measured circumference, like an inch rope.”
Don Barger, 7 March 2017