Conservation works are progressing in Ballarat at Her Majesty’s — considered Australia’s oldest working theatre, and a rare survivor among a group of 19th century Goldfields theatres that rivalled those in the state capitals. We are working on the interior and exterior, focusing for the moment on remediation, auditorium conservation works, roof works, waterproofing, fire services and the strengthening of the stage and the trusses over it. The works are partly funded by a $2m Living Heritage Grant from Heritage Victoria. Current owner, the City of Ballarat, has launched a campaign to raise money to support the future of the building.
Watch the campaign video. 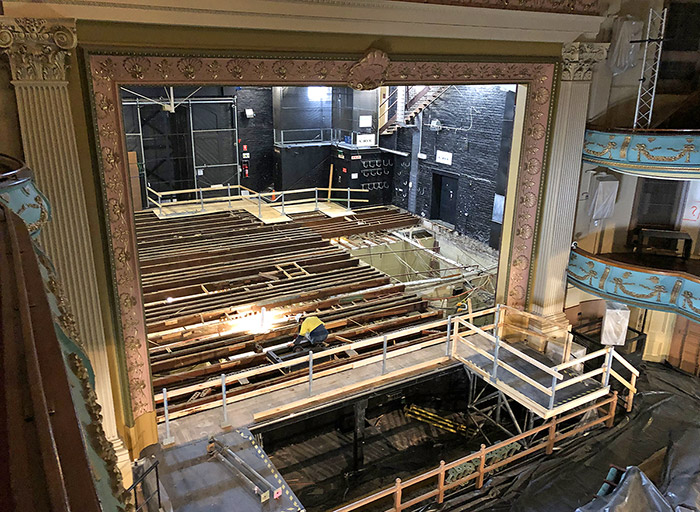 The stage area is the subject of significant engineering interventions. The non-compliant stage substructure is being replaced, a new steel frame inserted and remedial work to strengthen the roof area undertaken. New columns and beams are being threaded into the existing fabric, with no change to floor levels. Three large timber trusses span the stage. During the documentation phase, a major crack was found in one, and to help the structure carry the loadings required of it, new steel trusses are being installed alongside the originals. The timber trusses will support the roof, with the steel ones supporting the fly tower and new stage equipment. 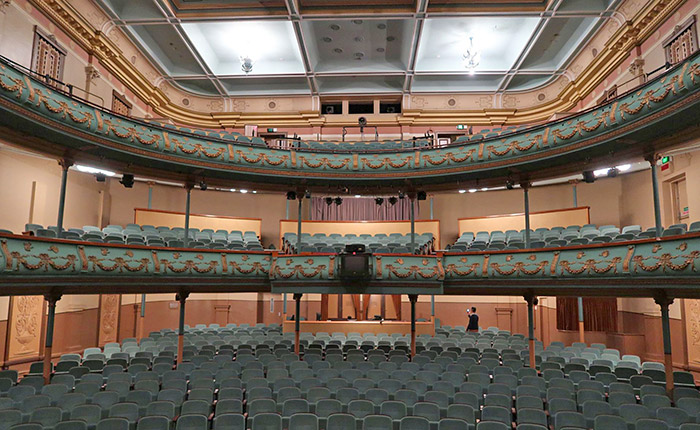 Her Majesty’s has a very interesting auditorium, with double horseshoe-shaped balconies supported on columns. These are the last of their type remaining in Victoria. The building was constructed in 1874-5 to the design of noted architect George Browne, who also designed Rupertswood for the theatre’s patron, William J. Clarke. A second important architect, and one-time apprentice of Browne — William Pitt — made alterations in 1898, including the addition of a balcony to make the distinctive double-horseshoe auditorium format that survives today. It’s the last example in the state. Pitt’s other work includes Melbourne’s Princess Theatre, where we are currently engaged in exterior conservation works. In Ballarat, the auditorium walls are being stripped back in preparation for reinstatement of the 1898 scheme, the work of decorators C.S. Paterson Brothers of Little Collins Street, Melbourne. 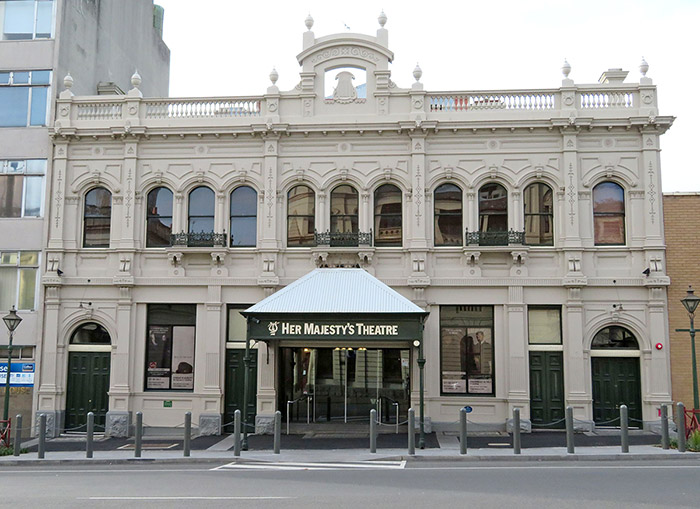 The works include attention to weatherproofing, such as gutter replacement. Above the Long Room, an early copper internal gutter is being matched like-for-like, correcting some of the detail to match the original. In the basement temporary remedial works to the brick north and south walls have been completed, with removal of efflorescence, and the injection of lime grout is proposed to reduce the impact of damp. The pavement lights that illuminate the basement are being restored.

One interesting heritage feature of the theatre is its row of 1930s terracotta urinals, which are still in use. These too are subject to conservation works. Cracks are being repaired with pigmented epoxy to match the existing, the non-original concrete drain is being replaced in terracotta, and the hydraulic flushing system repaired.

The fabric of the building is being made good inside and out, with re-rendering and re-plastering and a myriad of minor repairs. To bring the fire services up to date, exit/emergency lighting and smoke detectors are being replaced, a new fire indicator board installed and a new fire door of sympathetic design added in the foyer. The works will continue until mid 2019.

The current works are jointly funded by a grant from the Living Heritage Programme of the Department of Environment, Land, Water and Planning through Heritage Victoria, and the City of Ballarat.